Keeping you in the loop

There's always a lot happening at Cutting Edge Helicopters.
If you have any interesting news relating to our business or the industry please do let us know. 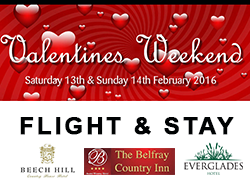 We are delighted to collaborate with Derry's finest hotels to create this luxury flight and stay experience. Indulge on a stay at one of our partner hotels located in Derry-Londonderry. This luxurious flight and stay package includes a one or two night stay with breakfast and dinner in the hotel's restaurant. On the day of your choice a private chauffeur will arrive at your hotel to escort you to Cutting Edge Helicopters, located just 10 minutes away. This valentines flight and stay package allows you to choose between four helicopter sightseeing tours, all departing from our headquarters at City of Derry Airport. Highly experienced pilots and personnel will provide a professional and reliable service allowing you sit back and enjoy every second of your unique experience. Your private chauffeur will await your return and escort you back to your hotel. It doesn't get more luxurious than this! Book directly with our partner hotels: 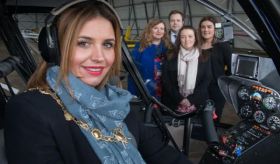 The owner of a Londonderry helicoptor tour firm says a local Council initiative has been pivotal in helping it launch a new 'Game of Thrones Tour' from its Eglinton helipad.

Jason Porter of Cutting Edge Helicopters says the Rural Tourism Development Programme, which ran from January 2014 to June 2015 and was part financed by Derry City and Strabane District Council, with matched funding from Invest Northern Ireland and the European Regional Development Fund, has been a great 'lift.'

We've been working hard on our brand re-fresh recently and our new logo is just the beginning! 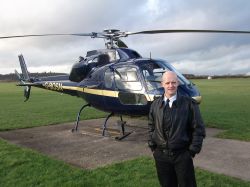 Congratulations to Ben Creighton on passing his EASA Instrument Rating. Ben is a past student of Cutting edge Helicopters and completed his PPL training at The City of Derry Airport. This is what Ben had to say about his training with ourselves:

"I started my PPL course with Cutting Edge Helicopters in October 2009 and within 6 months I had passed my skills test. I found the level of instruction to be excellent and the cost was very competitive. I thoroughly enjoyed my time at Eglinton and would highly recommend it to anyone wishing to learn to fly helicopters. The skills and techniques I picked up from my PPL days have helped me get where I am today - the proud holder of an Instrument Rating. Thanks to Jason and all at Cutting Edge Helicopters." 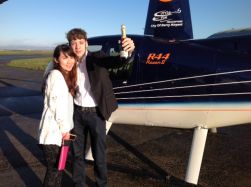 Congratulations to William and Cecilia on your engagement flight. William surprised Cecilia whilst hovering over the Mussenden Temple and asked her to be his wife. After saying 'yes' Cecilia and William were then treated to a tour of the spectacular north coast. We would like to wish them both all the very best from all the team at Cutting Edge Helicopters.

If you would like to surprise somebody special then why not contact our office to see what we can do for you. 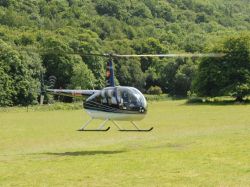 Our 2014 events calendar is taking shape with a number of events taking place throughout the year. Flight vouchers can be purchased online in our events section for each venue, over the phone or at each location. We hope to see you throughout 2014 at one of our many events.

Lord Dunluce and his two children enjoyed a fantastic tour of the Glenarm estate, except this time it was from the skies! He toured around the locality, and was impressed by the breathtaking views , made even more spectacular by the perfect weather conditions. From the air the passengers could see as far as the Mull of Kintyre and across to the Scottish Mainland. 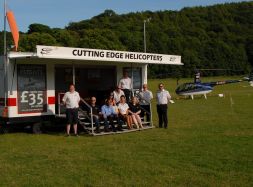 We would like to thank everybody who flew with us over the last two days at Glenarm Castle Highland Games. The superb weather made for some spectacular flying along the stunning coast. We had passengers from all over the world, including some of the Ulster Scots of America. One of our passengers was Lord Dunluce himself, who thoroughly enjoyed the experience. Over 400 passengers took to the skies and we hope to see you all there next year! What a great highlight of the summer. 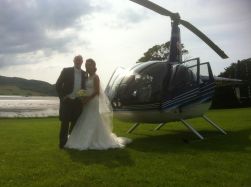 Cutting Edge Helicopters were delighted to fly newlyweds Judith and Damien on their special day to make it a day to remember.

Judith booked the flight as a surprise for Damien allowing them to get some amazing pictures and take in all the sites of the city.

The Cutting Edge Helicopters team would like to wish them both a long and happy marriage. 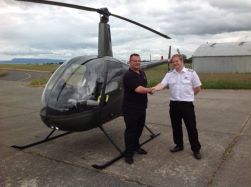 Congratulations to Don Justin on his first solo in the Robinson R22 helicopter today. Don has been making great progress over the last week and is looking forward to gaining his PPL with Cutting Edge Helicopters. Well done Don!